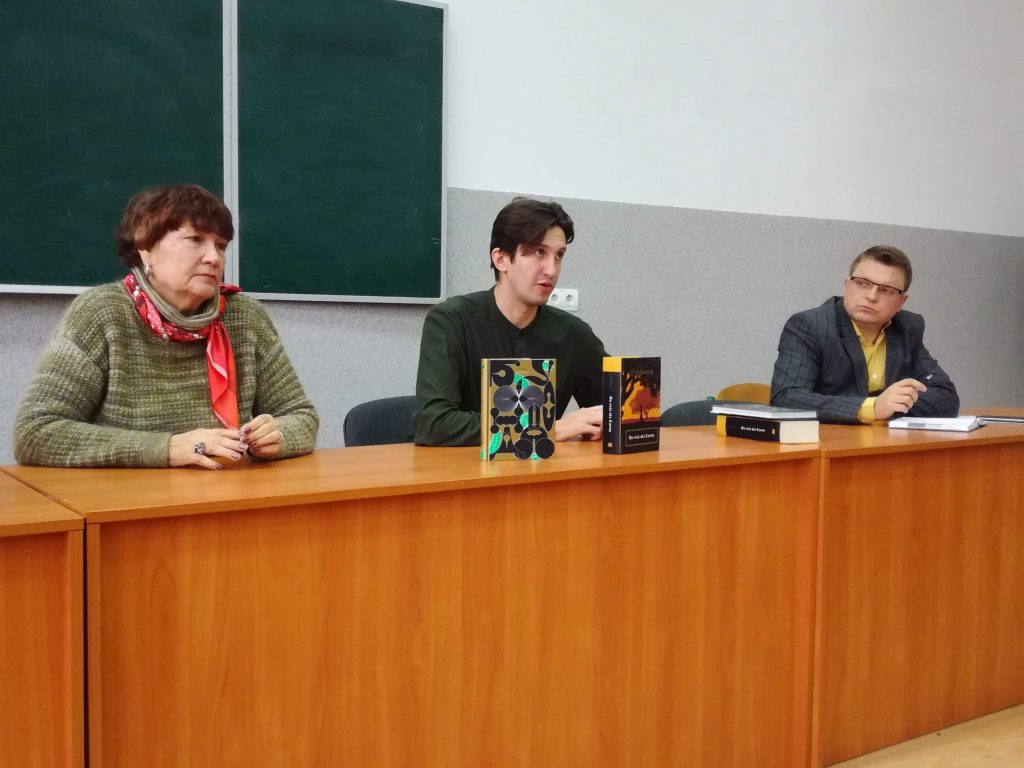 Presentations of translations of the novels “East of Eden” by John Steinbeck and “Slapstick or Lonesome No More!” by Kurt Vonnegut held November 26, 2018 at the Faculty of Foreign Languages with the participation of translator and professor Tetiana Nekriach and Roman Malynovskyi, chief of “Babylon Library” publishing house. Head of the Department of English philology,professor doctor Yakiv Bystrov acted as moderator of the event.

Tetiana Yevhenivna interested all of the presents with her literary translation world, told about both the methods that dominated in Ukrainian translation traditions and her own author solutions. Namely, it was about tactics and strategies that provided the opportunity for the faithful rendering of the author’s text and the author’s plume technic. Tetiana Nekriach made examples from her last works that became the real translation challenges. Tetiana Yevhenivna created a friendly atmosphere, so all tutors and students present there were able to ask questions, to talk and to get some pieces of advice about the improvement of literary translation skills. Roman Malynovskyi singled out Tetiana Nekriach’s special creative approach of immersion in the text when the translator uniquely “live” with the text during a short period of time. According to him, she was the first translator who showed such a phenomenal efficiency and made the translation of “Slapstick or Lonesome No More!” by Kurt Vonnegut in 21 days. The following discussion about the relationship between the translator and the publisher became not only interesting but also useful for those, who started a collaboration with publishers of fiction.

Note. Tetiana Nekriach is a translator, translation critic, professor of O.M. Morokhovskyi Department of English Philology and Philosophy of Language of Kyiv National Linguistic University, graduate of Fulbright Program and the author of more than 100 scientific works on literary criticism, stylistic and translation.

Representatives of IT companies participate in online classes

Career guidance online meeting with the students of Burshtyn schools